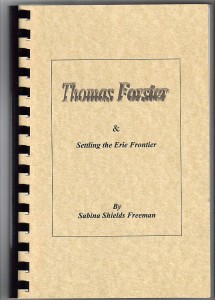 Thomas Forster was 34 in 1796 when he first came to Erie County, Pennsylvania to inspect the Walnut Creek holdings of the land company, Harrisburg and Presque Isle. Four years later he left a political career and a comfortable home near Harrisburg to help manage those holdings, although he settled nearby in Erie. For the remainder of his life he worked for the betterment of his adopted home.

* First Collector of Customs for the Presque Isle District; he continued with this presidential appointment until his death in 1836. Those presidents were: John Adams, Thomas Jefferson, James Madison, James Monroe, John Quincy Adams and Andrew Jackson.

* Organized the Erie Light Infantry, which saw duty in Buffalo during the War of 1812 and helped to guard Oliver Hazard Perry’s fleet while it was under construction for the Battle of Lake Erie.

* Family members helped to create Commodore Perry’s flag, “Don’t Give Up the Ship.”

* Educated as a civil engineer; saw military service three times (held the rank of Colonel); elected to several terms as a County Commissioner; elected president of the Erie & Waterford Turnpike Company; represented Erie County in establishing the route of the Erie Extension Canal; and more.

* Was responsive to the cultural needs of Erie – helping to establish the first library, the Erie Academy, and St. Paul’s Episcopal Church.

A highly regarded county history edited by Samuel P. Bates and published by Warner, Beers & Company in 1884, recognized Thomas Forster as having been the “foremost man in most of the early improvements.” He “became thoroughly identified with its interests.”

In his obituary the Erie Gazette eulogized him stating: “In all the relations of life, his worth and usefulness will be long remembered.”

The book includes a Timeline of events (local, state and national as they impacted his life) from his birth in 1762 to his death in 1836.

The book includes several photos, and early maps of the Fairview and Erie area.

The book is available through the author and the Fairview Area Historical Society.