The Life and Times of the Battles Family of Girard, Pennsylvania 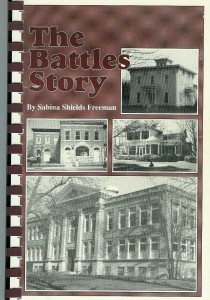 The Battles Family was one of the leading families in Girard, Pennsylvania (Erie County) from the time of the arrival of Asa in late 1823 until the death of the last Battles in the area, Elizabeth, in 1952. Her good friend Georgianna Read kept the Battles legacy alive until her own death in 1982. Since that time the Erie County Historical Society has taken on the task of preserving the buildings and the legacy.

The story of the Battles family is one of entrepeneurship, of success, of early America finding its way. Ms. Freeman wrote the book as a series of articles commissioned by Girard’s newspaper, the Cosmopolite Herald in 1987. It was published in book form in 1992 and has been in print ever since. Edinboro University used it as the text for classes in archeology when “digging” on the Battles farm.

The book is indexed with a photo section that includes 22 photos of family members, Girard buildings, a bank note, a locomotives, etc. Rush Battles owned the Climax (Locomotive) Manufacturing Company in Corry, Pennsylvania, as well as the Battles Bank. During the Depression Pres. Franklin Delano Roosevelt ordered all the banks to be closed the week of Monday, March 6, 1933. They would open again individually upon examination. In Pennsylvania there were 1,147 banks at that time and of them, 1,146 closed as directed. The Battles Bank, with Elizabeth Battles as sole owner and her uncle, Charles F. Webster as manager, purportedly sent a telegram to President Roosevelt saying: “We’re minding our business, you do the same.” True or not, the Battles Bank remained open for its own clientele.

The story of the family is part of the development of their town, Girard. Next to Lake Erie, with land fine for farming, with such famous folk as circus showman Dan Rice living here for about 25 years during the height of his career, the book is a picture of life in middle America during the 1800s and early 1900s.