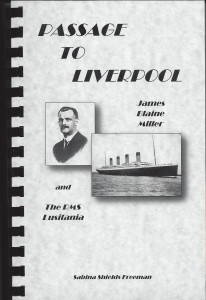 Passage to Liverpool is about the sinking of the Lusitania, one of the great (or worst) tragedies of the sea. As a result of its loss, the U.S. was dragged into war, although there would be a national election for president before that happened. While Woodrow Wilson, who was seeking a second term, tried to keep the U.S. out of war and campaigned on that slogan, it was not possible to remain neutral. German U-boats were causing havoc with our shipping. How could we ignore our losses? Those losses included the Americans aboard the British ship RMS Lusitania.

An excerpt from the book:

“The Lusitania was built for luxury. The first class dining saloon was a vision in white and gold and decorated in the style of Louis the 16th. The first class lounge was decorated in the late Georgian period and had a wonderful domed ceiling. Some of the first class bedrooms were regal suites that included a dining room, drawing room, two bedrooms, bath and toilet rooms, plus an adjoining room for a maid or valet. Second class passengers also had luxurious rooms and third class, or steerage, had individual rooms with berths, rather than dormitory sleeping arrangments.”

The Lusitania was simply the grandest ship afloat… perhaps ever. It was “a technological wonder of her age,” according to Robert E. Ballard in his book Lusitania. Ballard, for those who love the sea, will be remembered as the man who found and explored the wreck of the Titanic.

Taking that last fateful voyage, although he had not originally booked passage on it, was Capt. James Blaine Miller of the U.S. Coast & Geodetic Survey Service. He had a 12-year career in the service behind him and only months before had been in command of a rescue near the Aleutian Islands that had received national attention. Now he planned to go to Glasgow, Scotland to study at the university. His passage was originally on the British liner S.S. Cameronia, but the British commandeered it for military use and transferred the passengers to other liners traveling to Europe that May 1st in 1915. Miller and 36 others were reassigned to the RMS Lusitania.

Conspiracy theories still circulate as to whether or not the German U-boat captain was laying in wait for this grand ship. Or was it happenstance? Was there a military escort ship that was called back? Did the British believe that the sinking of this ship with so many American passengers aboard would bring the U.S. into the war? Were the British conspiring with the U.S. State Department to bring the Americans into this war? What exactly was in the cargo? Did the cargo explode? How many torpedoes struck the ship? Why won’t the Irish Government allow the current owner of the wreck to do indepth exploration of the wreck? Oh, so many questions. Perhaps the answers are easy. Perhaps we refuse to accept that this magnificent ship could falter so easily and sink so quickly (18 minutes!).

Passage to Liverpool is the story of a fine ship, and particularly of one man, the regard he and his family had for each other, and how this disaster affected them.

Passage to Liverpool – James Blaine Miller and the RMS Lusitania

New! We now offer Passage to Liverpool in PDF Form! Please contact us for more information.