Sabina offers lectures based on her books. Available are “Abraham Lincoln in Erie County,” “Erie County Women in War,” “From Griswold Field to the Erie International Airport,” Barnstormers and Cloud Busters,” “Passage to LIverpool,” “Cloud Busters (Neil McCray)” and “Send Us Your Poor, Your Sick and Aged.” Watch this space for more booklets and presentations.

Settling the Erie Frontier Thomas Forster was 34 in 1796 when he first came to Erie County, Pennsylvania to inspect the Walnut Creek holdings of the land company, Harrisburg and Presque Isle. Four years later he left a political career and a comfortable home near Harrisburg to help manage those holdings, although he settled nearby in Erie. For the remainder of his life he worked for the betterment of his adopted home. * First Collector of Customs for the Presque Isle District; he continued with this presidential appointment until his death in 1836. Those presidents were: John Adams, Thomas Jefferson, James Madison, James Monroe, John Quincy Adams and Andrew Jackson. * Organized the Erie Light Infantry, which saw duty in Buffalo during the War of 1812 and helped to guard Oliver Hazard Perry’s fleet while it was under construction for the Battle of Lake Erie. * Family members helped to create Commodore Perry’s flag, “Don’t Give Up the Ship.” * Educated as a civil engineer; saw military service three times (held the rank of Colonel); elected to several terms as a County Commissioner; elected president of the Erie & Waterford Turnpike Company; represented Erie County in establishing the route of the Erie Extension Canal; and more. * Was responsive to the cultural needs of Erie – helping to establish the first library, the Erie Academy, and St. Paul’s Episcopal Church. A highly regarded county history edited by Samuel P. Bates and published by Warner, Beers & Company in 1884,... 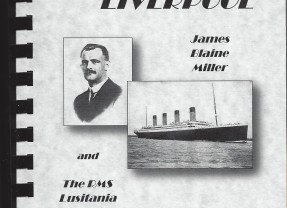 James Blaine Miller and the RMS Lusitania Passage to Liverpool is about the sinking of the Lusitania, one of the great (or worst) tragedies of the sea. As a result of its loss, the U.S. was dragged into war, although there would be a national election for president before that happened. While Woodrow Wilson, who was seeking a second term, tried to keep the U.S. out of war and campaigned on that slogan, it... 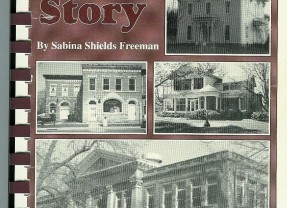 The Life and Times of the Battles Family of Girard, Pennsylvania The Battles Family was one of the leading families in Girard, Pennsylvania (Erie County) from the time of the arrival of Asa in late 1823 until the death of the last Battles in the area, Elizabeth, in 1952. Her good friend Georgianna Read kept the Battles legacy alive until her own death in 1982. Since that time the Erie County Historical Society has...

Sabina offers lectures based on her books. Available are “Abraham...

Settling the Erie Frontier Thomas Forster was 34 in 1796 when he first came... 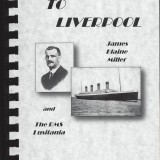 James Blaine Miller and the RMS Lusitania Passage to Liverpool is about the...

The Life and Times of the Battles Family of Girard, Pennsylvania The Battles...

Twice Around the Township

Fairview History Retold Twice Around the Township is a compilation of 73...